Murray Foster Missing in Toronto; Replaced by a Robot 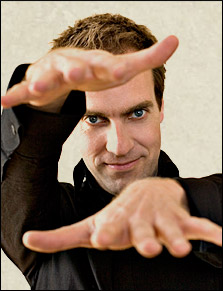 TORONTO (AP) – Murray Foster, bass player and vocalist for Toronto Indie group Moxy Früvous, was recently discovered to be a robot. The FosterBot was discovered while performing at C’est What? in Toronto with local singer-trumpeter and all-around “hottie” Tory Cassis. A spokesperson for Moxy Früvous’ management, who spoke on condition of anonymity, stated that Foster was actually reported missing in December 1998 and the robot was constructed to keep the band’s rabid fan-base happy. “Jian, Mike and Dave were afraid of what would happen if it were discovered that Murray had vanished, so they suggested the robot.” The robot idea worked quite well until the band’s release of their final full-length album “Thornhill,” when it was suggested by some in the rabid fan “community” that Murray had indeed been abducted and all photos of him in the album’s notes were actually those of his look-alike replacement. Joe Navratil of Campbell, CA, spoke to reporters today at a news conference, “The real früheads knew that Murr had been abducted and the remaining guys were just covering it up.” Mr. Navratil said however, that he has no idea as to the whereabouts of the missing bassist. Toronto police have taken two suspects in the Foster kidnapping into custody. The suspects are Fiona Gardiner and Andrea Eves, both of Toronto. Police are currently questioning the self-professed “früheads” in the matter. Eves is reported to have been heard shouting to reporters, “We don’t have the Mur-man, that

Copyright © 2002 by snonsumr. All rights reserved. Please do not use this fanfiction without permission from the author.

3 responses to “Murray Foster Missing in Toronto; Replaced by a Robot”