TOMMY LEE JONES (As you’ve never heard him before!) 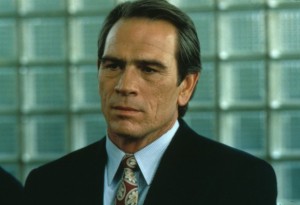 Editor:    Mr. Jones, thank you for agreeing to this interview.

E:    OK. Tommy, thank you for agreeing to this interview.

E:    (sigh) Tommy, will you please elaborate on your previous statement about Harrison Ford?

T:    For you, sure I will.  There’s just something about him that I don’t like.  When we were making “The Fugitive,” he told me he thought that I compromised my job as an actor by appearing on “One Life to Live.”  He said I give actors a bad name.  Well, I told him I thought Bob Falfa was a geek.  Then he said Doolittle Lynn was mean.  Then I said Han Solo was…

T:    It sure does.  I’ve never seen hair that looked so God-awful.  I mean, he’s got enough money, why can’t he get himself a decent hairdo?  Kramer has better hair.  Heh-heh, the big geek will really be mad at me now.

E:    Tommy, will you thank Harrison if you win the Best Supporting Actor Oscar this month?

T:  Hell no!  Why would I thank that schmuck for anything?  Wait, actually, I could thank him for taking the wussy part in the movie, considering with his name, he could’ve taken either part.

T:    Uh, no.  I don’t think so.  Why drag him into my time of glory?  He had his chance with “Witness,” but lost.  Probably because he was such a God-awful singer and dancer.  It’s a good thing he wasn’t around to try for the Gene Kelly part in “Singing in the Rain.”  He would have desecrated the whole flick!

T:    But all the territory in the U.S. has been settled.

E:    I meant, let’s talk about something else.

E:    Were you disappointed when you lost to Jack Palance a few years ago at the Oscars?

T:    Yeah, well how many people will be receiving this issue?

E:    What’s Sissy Spacek like?  You worked with her in “Coal Miner’s Daughter” and “JFK.”

T:    She’s really nice.  Talented too.  I guess they almost cast Mike Nesmith in my role, but she talked them out of it.  I owe her a lot.

E:    Really?  That’s interesting.  Speaking of Mike Nesmith, what do you think of this picture of him? 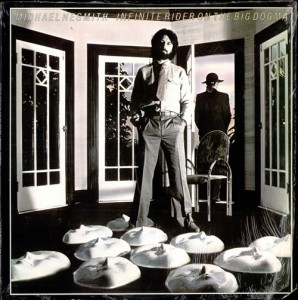 E:    No, he was in the group, the Monkees, from the Sixties.  You were around then.

E:    OK.  Why do you think this picture of Mike Nesmith is so funny, besides the fact that you think he looks like a monkey?

T:    Well, he looks like he’s trying to be a fashion model or something.  And it ain’t working! (doubles over with laughter)

E:    Ex-husband, actually.  His alimony is paying for this publication.

E:    You’ve given us permission to allow a segment on Harrison Ford’s upcoming exercise video. Have you seen it?

T:    But so was I, and I cancelled out his suckiness.

T:    Yeah.  Like discoey.  There are all these great new words out now.

E:    If you could have replaced Harrison Ford in any of his movies, which one would it have been and why?

T:    Hmmmmm.  I think it would have to be Indiana Jones because I look better in a hat and I know how to spell Neolithic.

E:    If you could have been in any musical, which one would it have been and why?

T:    That would have been “Grease” because I can hand jive.

E:    Thank you Tommy.  This truly has been an enlightening interview.

NOTE: This is a joke interview – nothing in here was stated by Tommy Lee Jones. Please do not take anything seriously.