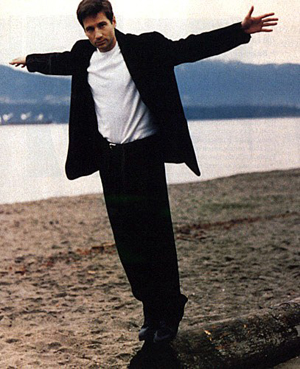 Cucumber Quarterly decided to take a few moments out of our busy schedule to interview one of Hollywood’s most talked about actors, David Duchovny. Actually, he cornered us in an alley and forced us into the building to conduct an interview.

CQ: Who is your favorite actor?

CQ: Who is your least favorite actor?

DD: Because he wouldn’t make me a cupboard. He also didn’t call me back when I asked him to redo my kitchen. Good help is hard to find. I was going to pay him for the supplies, too.

CQ: So what you’re saying is, he’s a bad carpenter?

DD: I don’t know, he never wanted to do the work for me. It’s not like he’s working right now. Not like *me* anyway.

CQ: No offense, but all your movies bomb.

CQ: So you were up for the role of Henry in ‘Regarding Henry’?

DD: Yeah, but I thought the role sucked after I auditioned. So I took the part of Bruce in ‘Don’t Tell Mom the Babysitter’s Dead.’ Excellent role! Much better than that stupid movie ‘Regarding Henry.’ And I turned down ‘Raiders of the Lost Ark.’ They wanted a young guy like me, but I wanted to go to college.

CQ: So you find that an education is more important than a Box Office smash hit?

DD: Of Course! What would you rather have? Millions of dollars or a Degree from an Ivy League school? Look at Harrison Ford…he was kicked out of school 3 days before graduation. He doesn’t have a piece of paper to hang on *his* wall.

CQ: But he is an Oscar-nominated actor and is the box office champ of all time.

DD: But does HE have a Ken doll bearing his likeness?????

CQ: Well he *does* have many action figures and a large Han Solo doll from the 1970s.

CQ: But your wife’s name is also the name of a beverage. And her TV shows sucked. And she can’t decide what color her hair should be. And those pearls…

DD: Well, Winona dumped me, so I was desperate.

CQ: What do you think of the X-Files spin-off ‘The Lone Gunmen?’

DD: Completely sucks…well all but one episode did.

CQ: Why all but one?

DD: It was the one I starred in, of course. I made the show. If they featured me more, then maybe the show would’ve made a second season. Don’t put me in it, then it gets cancelled. Simple as that.

CQ: You don’t think the time slot had anything to do with it?

DD: They didn’t ask me which time slot I liked. That’s the reason it got cancelled. You think I would watch it Fridays at 9pm? Who the hell watches *anything* on Fridays at 9pm?

DD: Well that’s different. That was the early 90s. Not the early oh-ohs. Hey are you writing that 90s with no apostrophe? Or 90’s with an apostrophe? I have to make sure so I can visualize it.

DD: OK, thanks. That really helps.

CQ: Um, if you were gay, who would you like to be stranded on a desert island with?

CQ: Mr. Duchovny, do you understand the question?

DD: Yeah, if I was happy, who would I like to be stranded on a desert island with. Tea [pronounced TEH-ah] makes me happy.

CQ: And coffee makes me happy.

CQ: I’m a heterosexual woman. I don’t have a wife!

DD: Oh. So, your husband’s name is Coffee? Very manly.

DD: Then who is Coffee?

CQ: Someone you pick up at Starbucks?

CQ: Or, if you’re in Canada, at Coffee Time.

DD: I’m not? Then what the hell was I doing there?

CQ: Mr. Duchovny … are you OK? Would you like some water? Coffee? Tea?

DD: [sigh] I just can’t do interviews without her.

CQ: What did you do before?

CQ: Before you were married?

CQ: Do you need to phone a friend?

CQ: Aren’t you friends with your wife?

CQ: Do all your Exes Live in Texas?

DD: OH! Cuz I thought you knew something I didn’t.

DD: Really? Do you have a piece of paper from an Ivy League School on *your* wall?

CQ: No, but I have seen the movie “Witness” many times and could tell you the last line of the movie.

[recites the last line from the movie]

DD: Are you sure that’s not from “Braveheart?”

DD: Oh. Well, that line was in the script when I read it… I turned it down, though, so they gave the part to that Mel Gibson loser.

CQ: Um, Braveheart was directed by Mel Gibson. Why would he have asked you to play the role and not him?

DD: Because I’m that good.

DD: Is not. You see, the center of the universe is me. You know that game “Six Degrees…”

DD: No, of David Duchovny.

CQ: Never heard of the game.

DD: Well, the root of the game is everything goes back to one thing. And that one thing is of course, ME! I’m David Duchovny. And I made that rhyme! [claps hands together]

CQ: Are you musically inclined?

CQ: What instrument do you play?

CQ: Are you sure?

CQ: What’s your favorite song to play on piano?

DD: Um, “Roll With the Changes” by REO Speedwagon. Kevin Cronin is my hero and inspiration.

CQ: Kevin Cronin the meaning in your life…was he the inspiration?

DD: Wow, you know that would make a good song! I should try that on the flute tonight.

CQ: Mr. Duchovny, I thought you said you played the piano.

DD: That’s what I said, on the piano tonight.

CQ: No, you said on the flute tonight.

CQ: But you just said you did.

CQ: Yes, you did. It’s on tape. Would you like me to rewind and playback?

DD: Hey, whatever happened to that show on VH1 called 8-Track Flashback?

DD: You know, that show that had David Cassidy, Leif “rhymes with safe” Garrett and Suzanne Somers.

CQ: What does that have to do with what we were talking about?

CQ: Mr. Duchovny, are you saying that I’m making things up?

DD: Oh! Like Lee Press on Nails? I love those! I wore them when I was in ‘Twin Peaks.’

CQ: So did you get in touch with your inner bitch during that series?

DD: [begins to sniffle] Are you calling me a bitch? What kind of interviewer are you?

DD: I went to an Ivy League school. I studied the ‘classics!’

CQ: The Byrds? The Turtles? Guess Who?

CQ: Yes, The Who was also a classic.

DD: That’s because you’re mean. You called me a bitch, and you won’t let Tea in here…

CQ: Mr. Duchovny, you were the one that wanted to do this interview. We didn’t ban Tea from the premises. In fact, we were just walking down the street when you stopped *us!*

DD: No, you stopped me! You’ve wanted to interview me for a long time! You said so yourself!

CQ: Actually we were on our way to interview Dean Haglund, your co-star from the show.

Copyright © June/July 2001 by SJG and CDK. All rights reserved.

NOTE: This is a joke interview – nothing in here was stated by David Duchovny. Please do not take anything seriously.